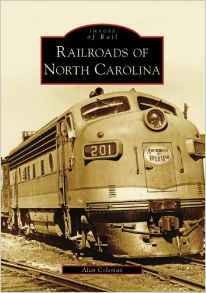 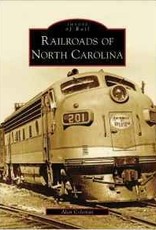 Since the opening of the first permanent railway in 1833, hundreds of railroad companies have operated in North Carolina. Rail transportation, faster and more efficient than other methods of the era, opened new markets for the products of North Carolina's farms, factories, and mines. Over the years, North Carolina rail companies have ranged in size from well-engineered giants like the Southern Railway to temporary logging railroads like the Hemlock. Cross ties and rails were laid across almost every conceivable terrain: tidal marshes, sand hills, rolling Piedmont, and mountain grades. Vulnerable to the turbulent and unregulated economies of the day, few railroad companies escaped reorganizations and receiverships during their corporate lives, often leaving tangled and contradictory histories in their passing.

Compiled by rail enthusiast Alan Coleman, this volume uses vintage photographs and information drawn from business records and other sources to capture the railroad companies that made their mark on North Carolina. Coleman is a technical writer/illustrator who resides with his wife in Hickory. He is a member of the Southern Railway Historical Association and the Norfolk and Western Historical Society and pursues his interest in model railroading through the Piedmont and Western Railroad Club of Valdese.